12 years in the same cage

Positive Horsemanship – why use clicker training 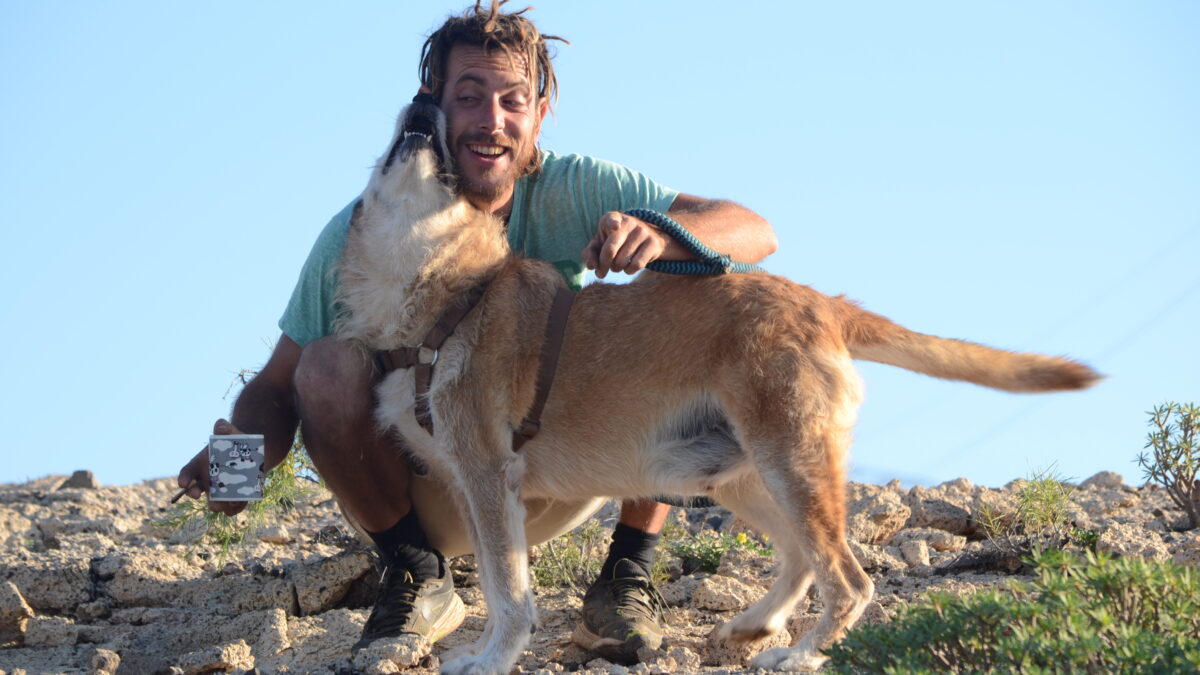 This was the case for 1 of our 2 new residents. 12 years in the same cage coming out only once every 2 months. The other isn't much better at 9 years with the same sad dog welfare story.

This sadly isn't an uncommon story and this isn't the dogs that need rescuing. This is the case of the dogs that have already been rescued. Due to the huge amount of abandoned dogs on a small island the shelters can not keep up. The reason is not because we have hundreds of street dogs or stray dogs. The reason is ignorance and lack of appropriate care from dog owners. For some unbelievable reason here the normal is not to castrate your animals but to discard the babies. This can be anywhere. The doorstep of a shelter ( for the fortunate ones). In a box next to the bins. Or in the valley to fend for themselves.

Please note this is of course not all pet owners, the island does consist of a huge amount of great animal lovers. It also consists of great vets who spread awareness, offer discount prices and help for castrating. This only makes it more confusing. If these services are so widely available and so many people know the appropriate dog welfare then why is it still such a huge problem?

Do people really think that it is ok to dump the babies? Do they really think its fair to let them free to fend for themselves?

The answer is yes they do. How do we know this? Because we have asked.

Some people genuinely do not realize the repercussions of their actions. Ignorance is bliss. They sleep well at night thinking that the dogs will be happy with their freedom. Also that their beloved pet has felt complete and natural having babies and didn't endure an "unnecessary" operation .

The image of them struggling to find a water source on our desert island or fighting over that scrap that a hiker dropped 3 days before doesn't even cross their minds. Or the image of the "lucky ones" who get found and spend many years or all their lives in a shelter hoping that someone will pick them over the other 1000's of dogs looking also for love.

One can argue that it is only nature for dogs to have babies and to be free. Sure that is nature. However the domesticated dog is not natural. For years they have been bred for pets and do not have the capabilities needed to take care of themselves in the wild. It isn't just the babies that end on the street. It can get worse. Old dogs which can no longer keep up or do its job and protect the grounds. Instead of allowing a peaceful retirement on a fluffy cushion with yummy food they can be tossed aside. After many years of living on a chain or inside a fence with water in a bowl and food being served they are expected to find their own? Of course they have no idea how to do this, even less when their old bodies are already failing them.

So this is how all of the shelters and sanctuaries are bursting at the seams. These 2 dogs came from a government run center with over 500 dogs currently. We were coincidentally asked about by a worker during a time that we were in contact with a lovely volunteers. Both us and the worker had the idea that we could offer some happiness to a tiny percentage of old dogs in their final years. Allow them to stretch their legs, visit the beach and smell all the smells beyond their kennel walls.

We arranged our first visit with a very kind long standing volunteer who is pure gold for those dogs. When we were arrived we were greeted by more kind volunteers. We were shown around the grounds and introduced to every single dog. This was a long morning and heartbreaking. We asked the volunteer to tell us which dogs needed our collaboration the most as they know them and we are not responsible to pick and choose who will win the reverse game of russian roulette.

We together short listed  6 dogs who have been a long time and get on well with other dogs. Due to our finca lay out and increasing dog family we have to be careful who we can help, and can't offer help to fighting or hunting dogs. During our time walking around and planning dogs we "named" them silly names to remember who was who as we made our decision. So let us introduce Porky and Lumpy our first shelter rescues. 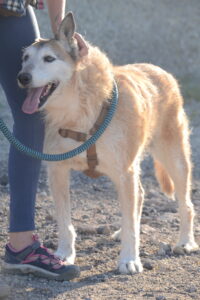 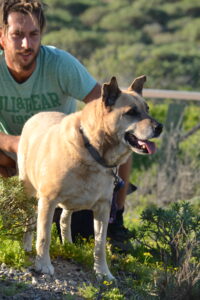 Porky got his name due to his huge obese state. 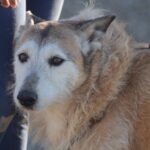 He is at least 15 kg over weight due to doing nothing for 9 years other than eat and lay still. He has been with us for 4 days and is in a constant state of excitement. Unfortunately a little to much and thinks ducks and chickens look like a great game. This little fatty is full of love and happiness and we can't believe no one ever picked him. Due to his condition and lumpy's problems they are both living in the run and coming out only for lead walks with the volunteers until things improve. 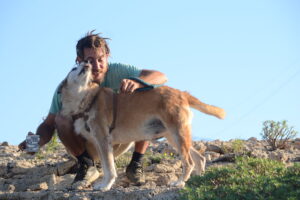 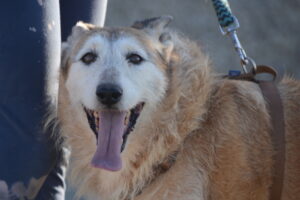 Lumpy got his name due to his lump. 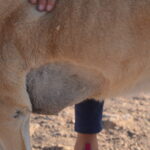 He had been inside his cage for 12 years and during his time grew a huge mass. Once we decided to adopt him they operated on it. Unfortunately (but not surprisingly) the operation was unsuccessful and he had to be sewn back up with his mass. We were unsure why they chose to do it now at his age of 14. However the important point is that he is recovering and happy. That he is, he acts like a puppy and is very excited. 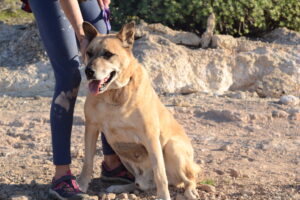 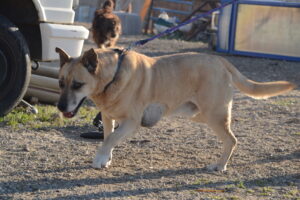 Lumpy will finish his cause of antibiotics over the next couple of days and we will continue to increase their exercise and integration to the finca pack until hopefully they can be free to enjoy their days with the volunteers and the other oldies Mac and Lio.

As you can see from the photos they already love the other dogs and can't wait to come out and join them. As long as Porky starts to learn that birds are not toys! 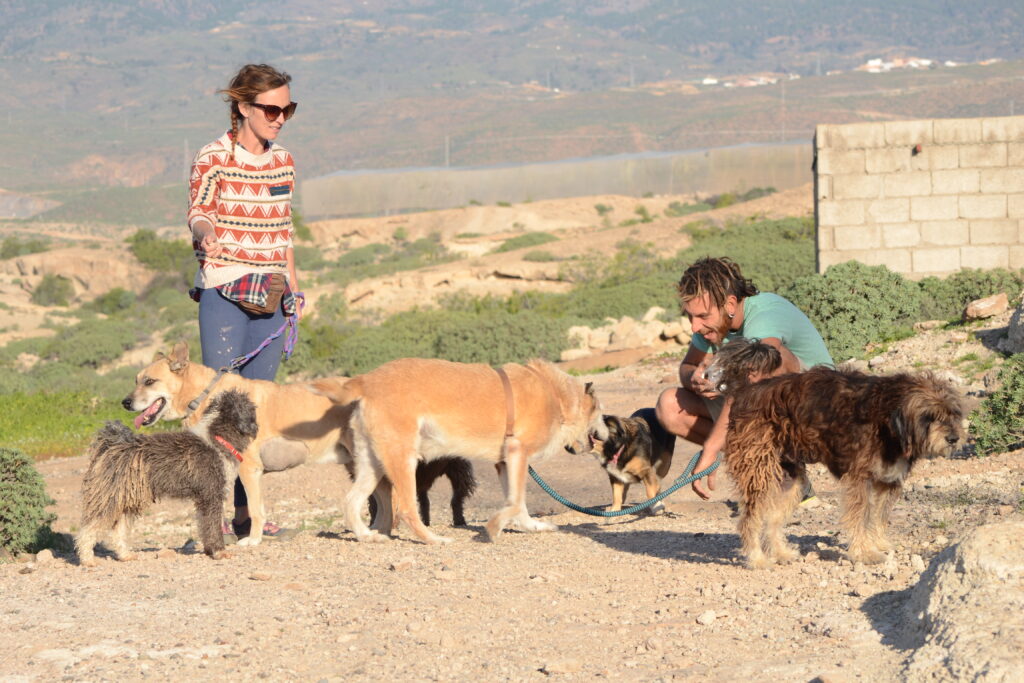 Unfortunately this will be a constant battle and we don't expect to see a light at the end of the tunnel anytime soon. But we will continue to join forces. Help where we can and spread awareness without judgement. We may not be able to change the world, but we can change the world for a small amount of animals.

But together we can do more.

So Thank you for reading and if you would like to sponsor either of these dogs you can monthly on patreon  for inside information and updates for as little as 2 euros a month.