How to be a live-in volunteer 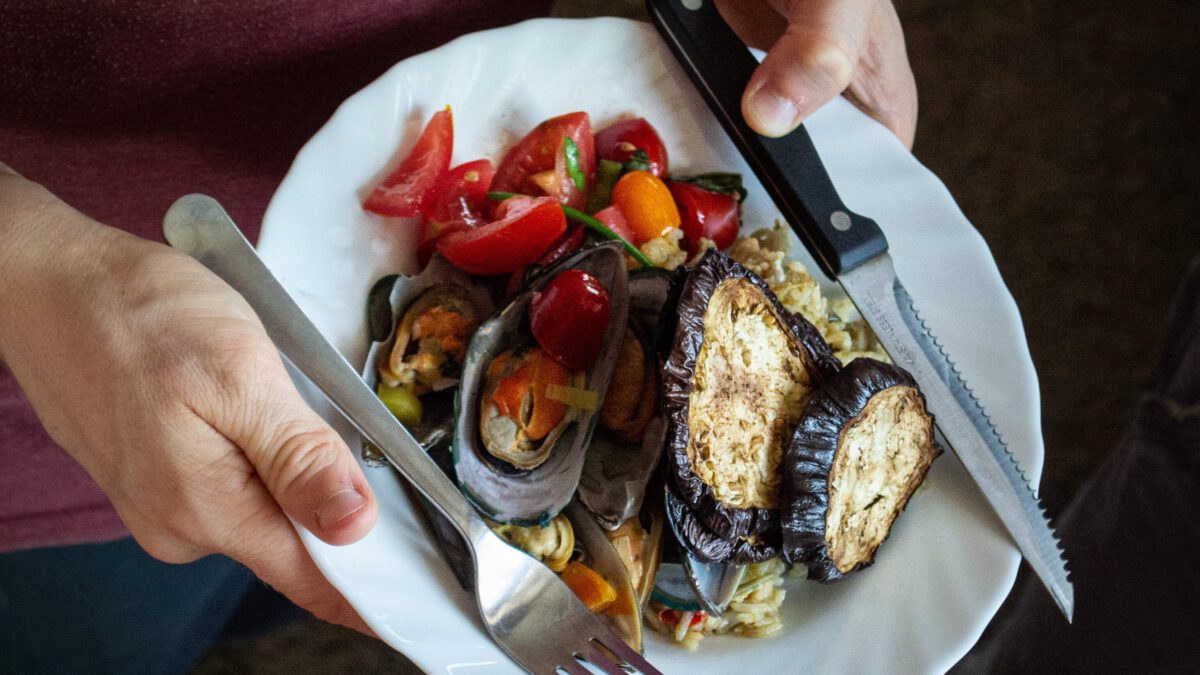 How to cook freegan? This is a question we get every now and again. Especially how to cook for such a big family. Today's blog post is written by a new volunteer: Felix Gömöry from Germany.

At this moment, Marine thinks to herself: Woah! While Raphael is heaving masses of food from the transporter, the French volunteer has to rethink today's menu. Because out of the transporter come mushrooms, cheese, peppers and other vegetables which have to be cooked as soon as possible.

Two hours before, Raphael had been in a local supermarket and was receiving groceries that otherwise would have been wasted. Here at Tenerife Horse Rescue, the kitchen team turns the otherwise wasted food into delicate dishes.

This lifestyle is called freegan: you only eat saved food. We live this here at Tenerife Horse Rescue since we try to be as ecological as possible. If you want to have further information about how to be freegan, read this blog post. 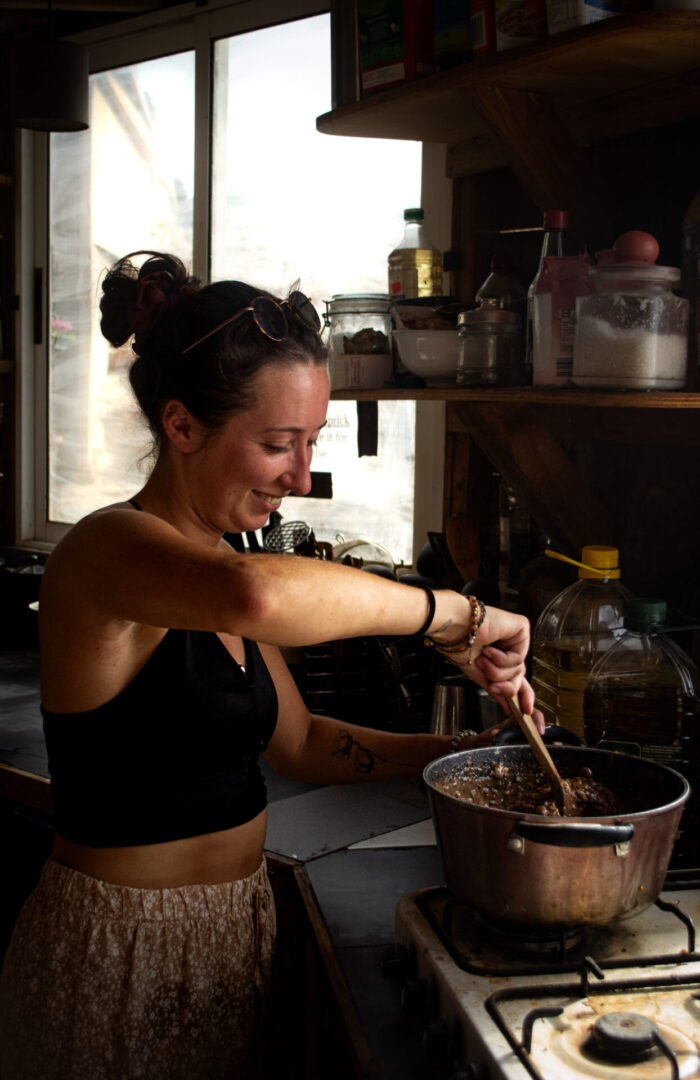 Marine the queen of the kitchen 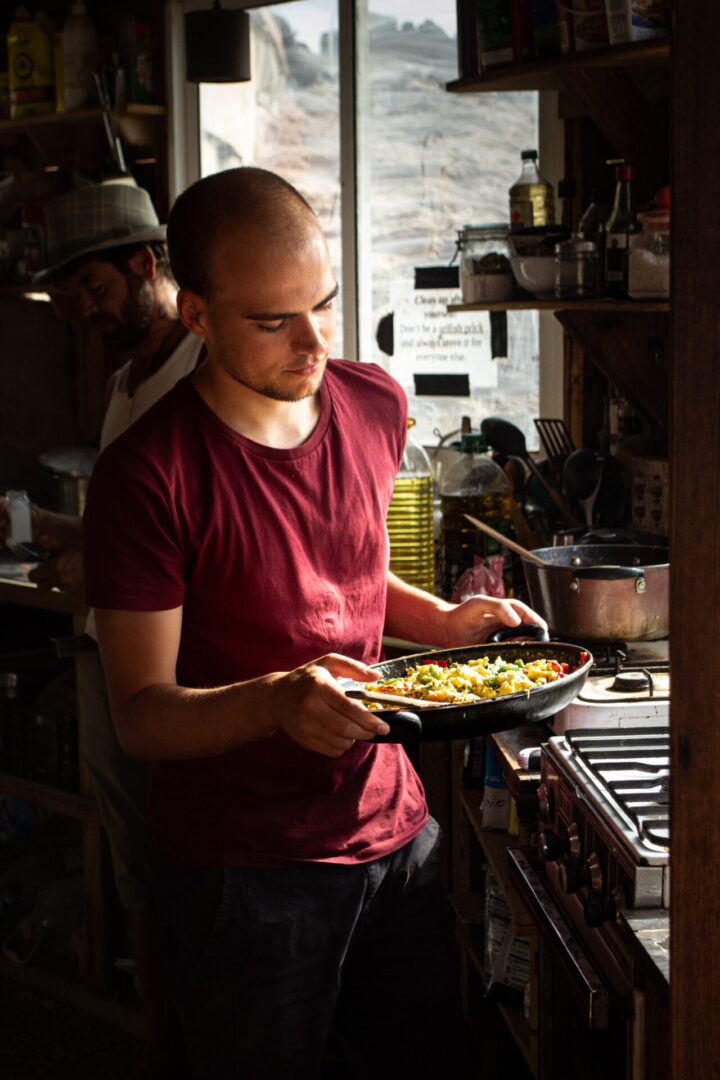 How to cook freegan for a freegan lifestyle

The kitchen team consists of two persons: Marine and Flo. They cook from Monday to Friday two daily meals for more than 30 other volunteers. And all this just with "rubbish" food. For breakfast there is usually banana pancakes (without added sugar), fruit salad, vegan porridge, veggie toast, scrambled eggs and Quiché. There is also often freshly squeezed orange juice and smoothie. For lunch, there are always different dishes. “Cooking for more than 30 people means also to mind many different diets because of allergies, intolerances, wishes, and needs.”, says Marine. “Some people eat no onions, no garlic, no cinnamon, no pear or no sugar. Some are vegetarian, some are vegan.” They try as much as possible to take care of that. And at the same time to keep the food as healthy as possible. Even if they can’t affect which ingredients are available. A characteristic feature that comes with the freegan lifestyle: you take what you get.

“I go every evening in the storage and check the ingredients so that I can plan for the next day.”, says Marine. “When the transporter with the saved groceries arrives, I check again if my plan’s still working. The plan can change, if something has to be cooked on the very same day because otherwise it wouldn’t be good any more.” 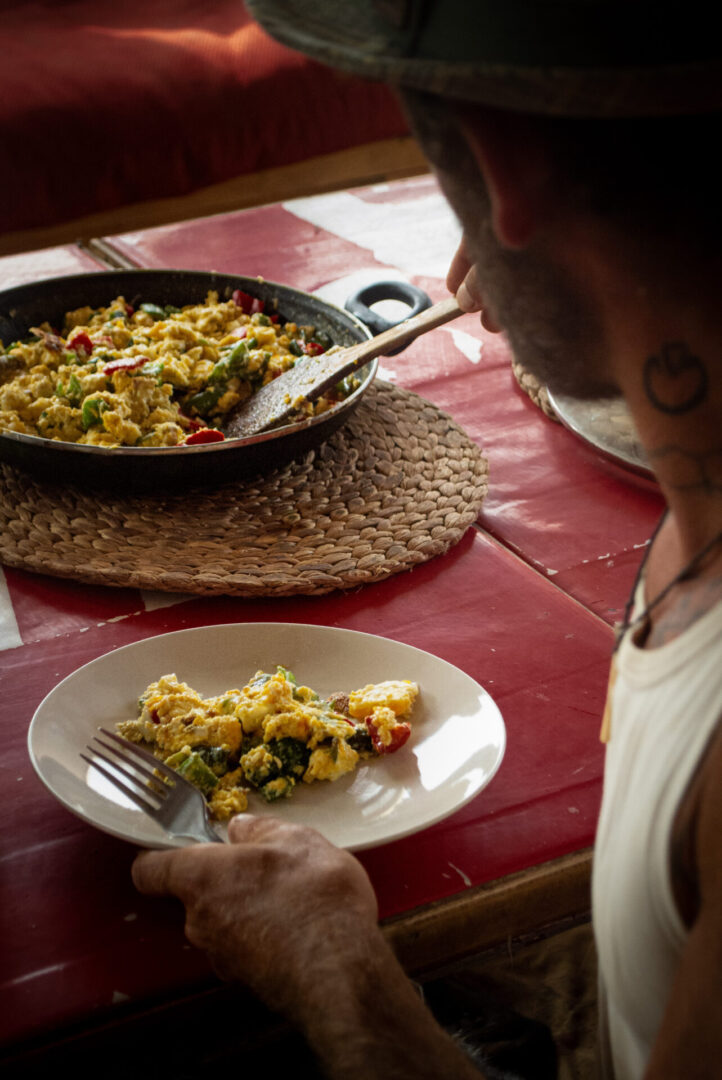 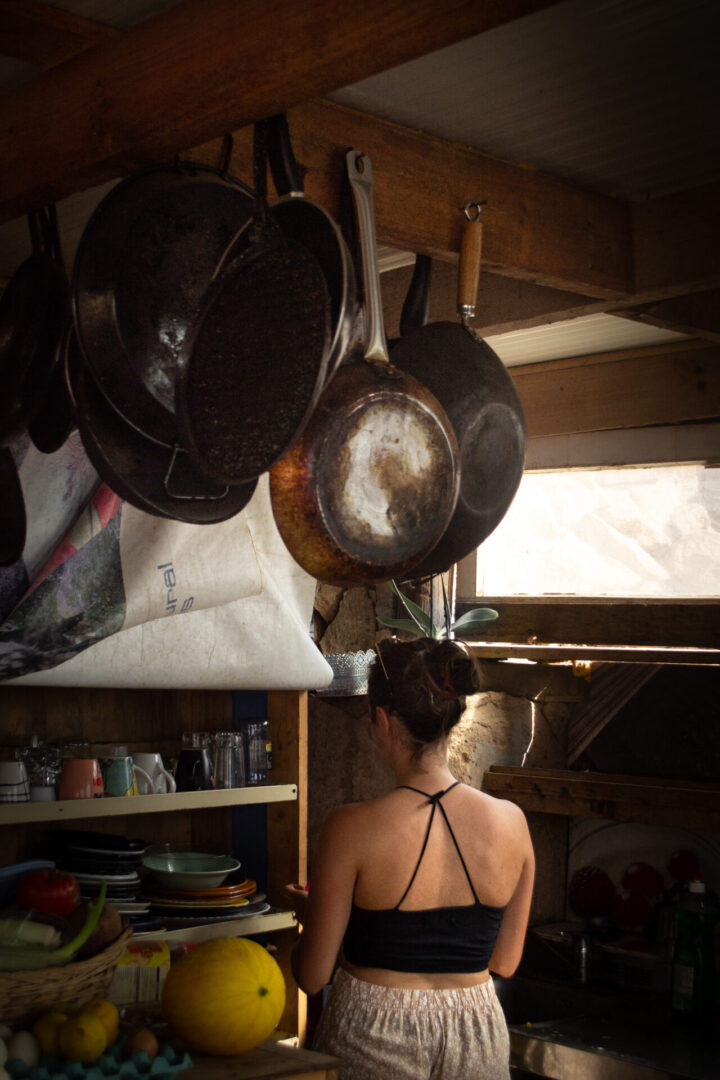 Raphael and Rico drive from Monday to Saturday to different places to collect the food. It took a long time to arrange this deal, however after registering as a food bank so that they can use and share food, an agreement was made to take and recycle food waste. On their roadmap: two big supermarkets, one bakery, one small farm and one vegetable wholesaler. Sometimes the groceries don't even fit into the transporter. The reasons why the food isn’t good any more for normal sale are very various. The fruits have bruises, are overripe or have mouldy spots you can easily cut away. The 24-pack of eggs is discarded because of one single broken egg. The potatoes have wrinkles. The bananas have brown spots. The rice or noodle plastic package has a little hole. The pack of beer or milk is sticky because of one piece leaking. The meat has grey spots, but is even according to BBD at least one more week good.

There are some things, which are actually always there, says Flo. “Many vegetables, fruits, and noodles. On good days there is also good meat, cheese, fish, sea fruits such as mussels or even lobster.” Some vegetables and herbs come from the finca-own garden: e.g., peppers, broccoli, tomatoes, pumpkins, cabbage, and artichokes. The eggs come partly from our free running ducks and chickens. To check if they’re still good, you put them into a water bowl. If they don’t rise, you can eat them.

The menus look randomly thrown together. Each day for lunch, there are five to seven different dishes. Here’s the menu from last week’s lunch: lentil stew, shrimps, fries, potato-vegetable-pan, Quiché, hot sauce (with peppers from the garden), noodles and pizza.

There are limitations of course: Because we rely on solar power, on the rare cloudy days on this island, you can’t use electronic kitchen tools such as the blender. Therefore, you don’t have smoothies on this day. “We’re missing spices, especially pepper, and all kinds of nuts.'' says Marine. And Flo ads: “Oil and butter are rare, so sometimes we just use water for frying.”

As we are passionate about sustainable living along with animal rescue this became a way of life. Not only do we save money, so we can use it exactly where it is needed for the animals. It also helps food waste, we recycle the plastic packaging which would otherwise be thrown in the bin and we can eat ethically. 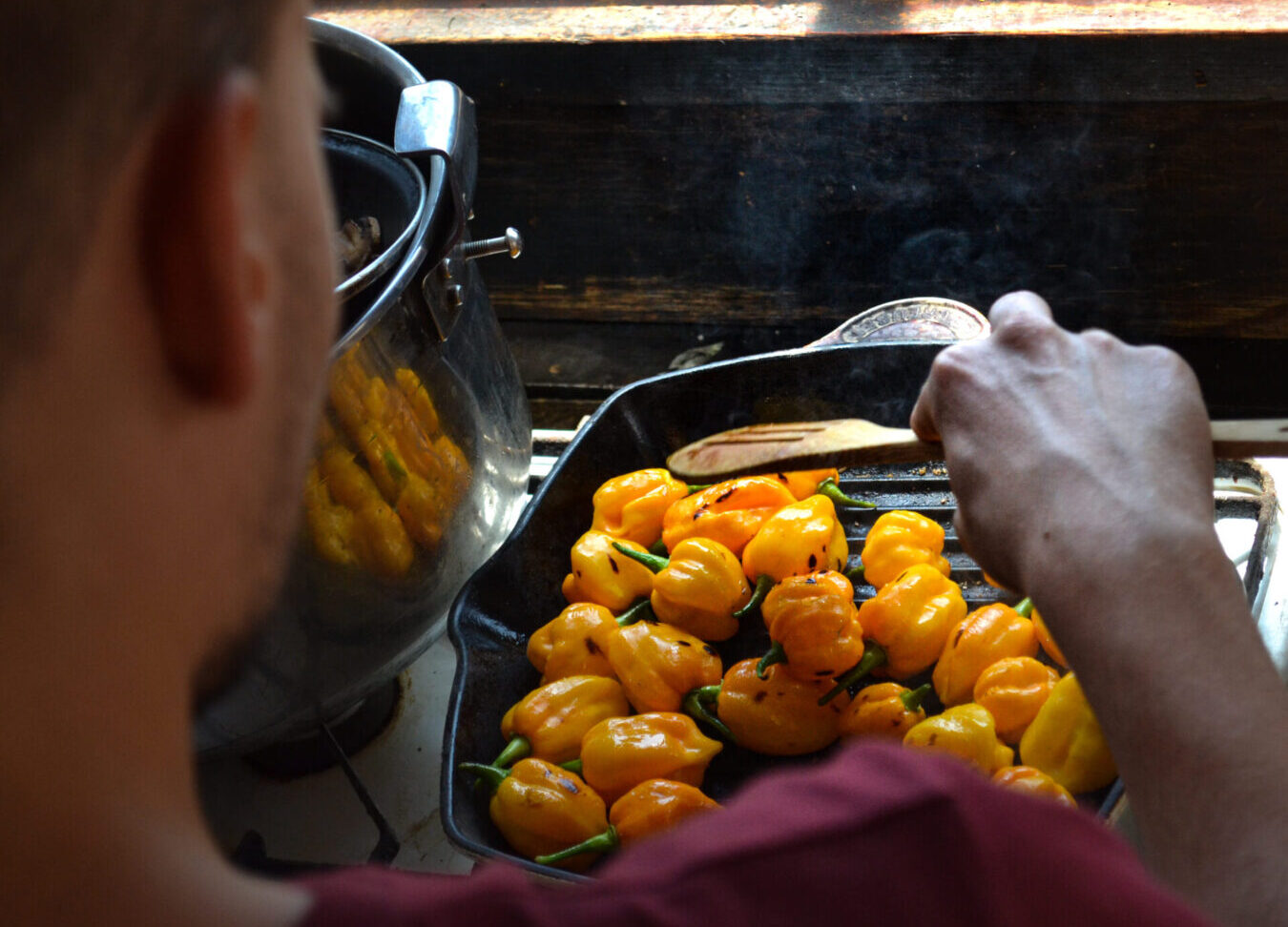 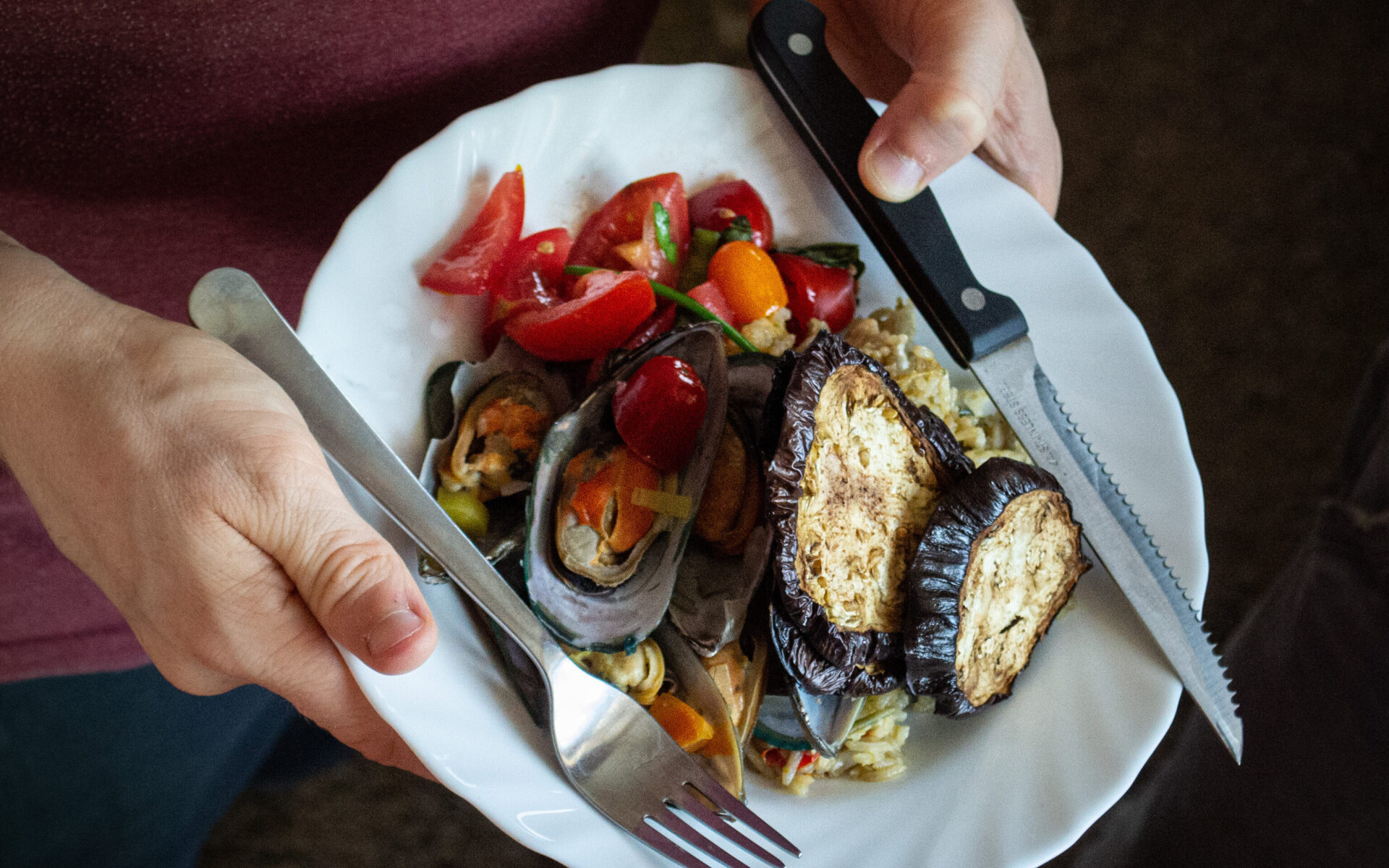 What Motivates the Kitchen Team?

Marine is at the Finca since May 2021. After a serious car accident a few years ago, she engaged herself with food. “I studied everything about nutrition, and I was cooking to cure myself.” She knows exactly how to prepare and mix the ingredients so that the body can absorb the nutrients and vitamins the best way. She’s sure that most people here at the finca are eating healthier than they do at home.

Flo has been at Tenerife Horse Rescue since the beginning of this August. For him, cooking has been his hobby since he was a child. “Because my single mother was at work, I automatically was cooking my own food. And that was fun for me from the beginning on.”

Cooking at the Horse Rescue gives them a lot back. Flo says:“I like cooking for other people, and I enjoy it if other people enjoy my food.” And furthermore, he says: “You can be creative, and you can try new things out.” Marine says with a huge smile: “It’s kind of my kitchen. And I love my cats and dogs here in the kitchen.” And she adds: “You work around five hours and after that, everyone is happy and graceful; that's a community, I would even say family moment.”

More information on how to save food: